StackHawk with GitHub helps teams understand the state of their DAST scans at a glance, directly in their pull requests or from commit statuses. View a high level summary of your latest HawkScan in your pull request, and see HawkScan statuses tied to commits.

You must have the official StackHawk GitHub app installed, with a GitHub repo mapped to the StackHawk application you are trying to get PR comments and commit statuses on. For detailed installation and configuration docs, check out the main GitHub App page.

Once the GitHub Integration is installed and a StackHawk Application is connected to a GitHub repository, you must make a few updates to your stackhawk.yml to start seeing commit statuses and PR comments.

This feature makes use of the open scan tags beta, by specifying a reserved tag that tells the StackHawk platform which commit the given scan is associated with.

Only the commit SHA is required for pull request checks; however, including the Git branch will show additional information about where a scan came from.

If you want the commit SHA and branch name to default to blank when not set, you can set a blank fallback value: value: ${ENV_VAR:}. This configuration is useful if you use the same stackhawk.yml locally and in CI/CD.

Reading the variables specified from your CI/CD provider will vary by provider. In the provided stackhawk.yml snippet, the environment variable containing the commit SHA and branch name must be passed to the appropriate scan tag. Some CI/CD providers directly provide these values as environment variables in your build. Others do not (Looking at you, GitHub Actions…).

Here are a few direct examples of configuring some popular CI/CD providers to work with this feature.

As referenced above, GitHub Actions does not provide the commit SHA or branch as an environment variable, but instead these values are provided to their workflow syntax.

For this CI/CD provider, use the following 2-step approach to enabling PR Comments:

Now the scanner will have access to these exact same environment variables we just populated. We can use these variables directly in our stackhawk.yml for those tag values.

See GitHub’s docs for why github.event.pull_request.head.sha and not github.sha for builds on pull_request. The TL;DR is that StackHawk requires the HEAD commit of the pull request branch, and this variable is the only place that commit SHA lives for pull request builds in GitHub actions.

If you are using the Jenkins Git Plugin, environment variables with these Git details will be set directly on your pipeline.

The commit SHA is provided by this plugin as GIT_COMMIT. For the branch, there are a few options, but to exclude the remote in the branch name, the best option is GIT_LOCAL_BRANCH.

Since these are set as environment variables, we are able to use them directly in our stackhawk.yml.

CircleCI also includes built-in environment variables that fit our needs. You can see the complete list.

Again, since the environment variables are set directly in the build, we can use them directly in our stackhawk.yml.

As you can see from above, CI/CD providers fall into one of two possibilities.

Once a commit sha has been provided on a StackHawk application linked to a GitHub repo, StackHawk will post commit statuses to that commit sha so that GitHub can provide a link to the last scan associated to that commit, and also provide a quick glance as to the overall result (success or failure) of that scan.

Once a commit sha has been provided on a StackHawk application linked to a GitHub repo, if there is an open pull request where that commit sha is the last commit, StackHawk will post a PR comment when the scan has completed with an overview of the scan along with a link to the scan details. 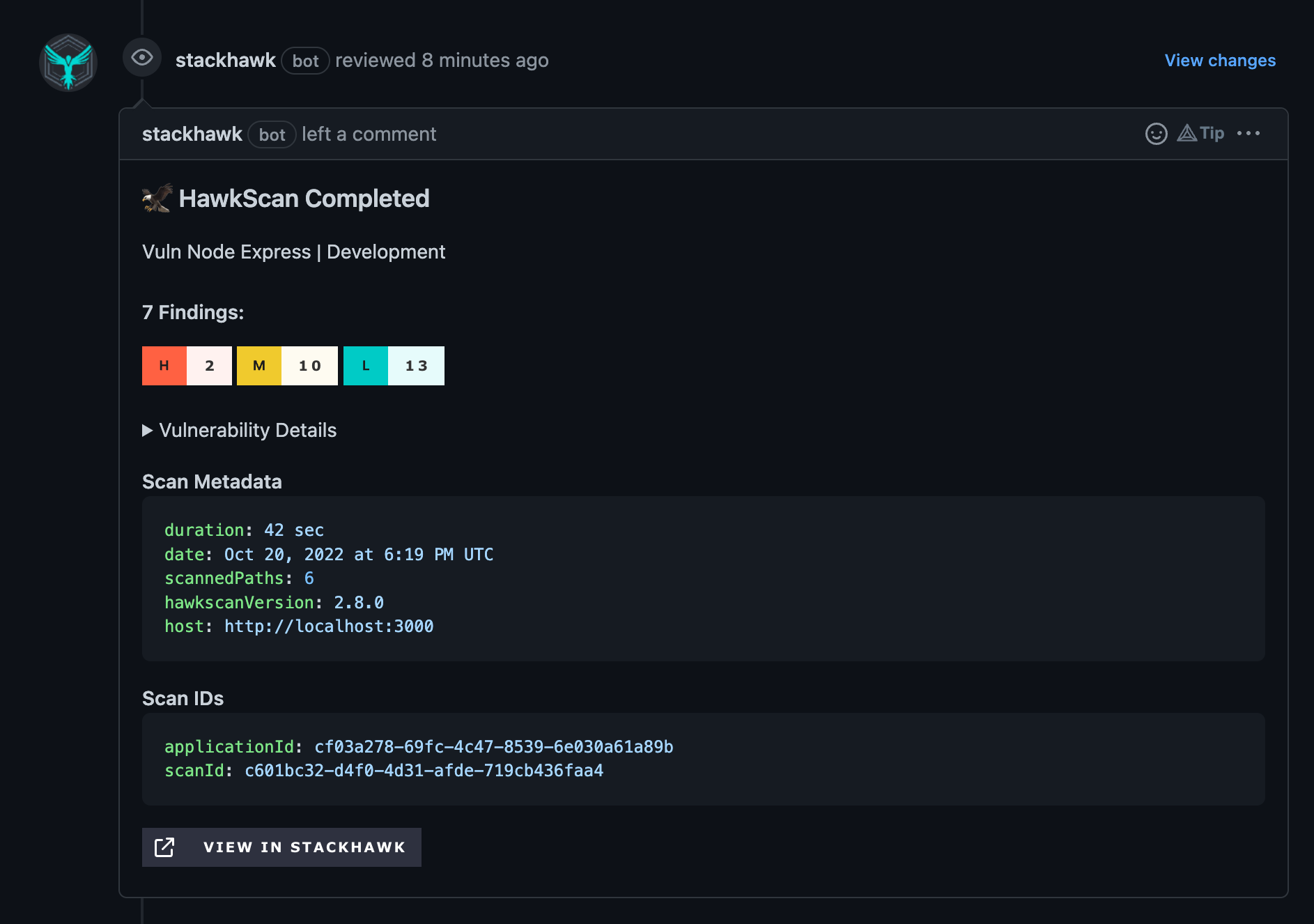 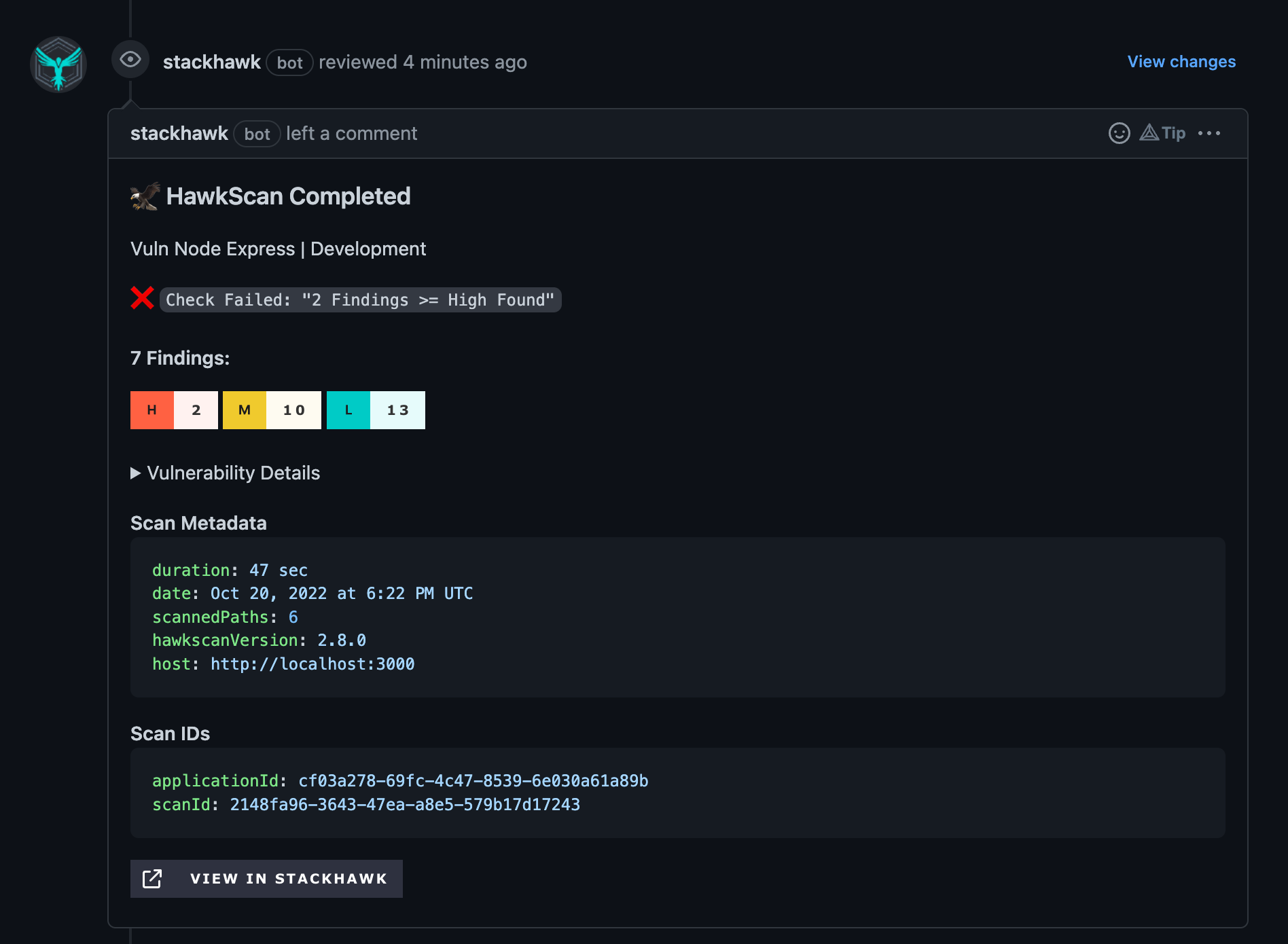 If for any reason the scan fails, a brief error message will be posted to the PR, along with a link to the failed scan.

Commit SHA and Branch in the StackHawk Platform

When these 2 reserved tags are provided, they will show up on specific scan details in the StackHawk platform as an easy way to see where a given scan came from.